You want to take Carinthia home? Then try to cook a typical Carinthian dish.

Put the flour, egg, salt, water (lukewarm!!!) and oil in a food processor and knead for about 5 minutes until the dough comes off the edge of the bowl. Place the ingredients on a pastry board and knead until a smooth dough is formed. Then wrap the dough in cling film and put in the fridge for 30 minutes.

Filling:
Mix the boiled and mashed potatoes (use potato press) with the curd cheese crumbly). Season with salt, pepper, mint, chervil, garlic and parsley. Chop onions finely, roast until golden brown. Mix everything with your hands and form balls. Let the balls rest for 30 minutes so that the spices unfold.
Take the dough out of the fridge, roll it out and form small thin pieces of dough from it – about 30 pieces. Place a potato ball on each and close the edges with a fork or “crimp” (close) the Carinthian-style dough. Make sure they are closed well, otherwise they’d cook open, what would be a pity.

Then put the pasta in boiling, slightly flowing salt water and cook for about 8 minutes. Incidentally stir more often. Once they are swimming on the surface they’re ready. Then take the pasta out of the water and serve with browned butter and chives or alternatively parsley.

It might come as a surprise to many that “Deutsch” or German Language is not only the official language for both Austria and Germany, but it is also one of the three official languages of Switzerland as well. Other places where this language is favored over others to include Belgium, Liechtenstein, Luxembourg, and Poland. Nearly 100 million people worldwide speak German as their native language. It is an inflected language; German has four cases for nouns, pronouns, and adjectives along with three genders (masculine, feminine, and neuter), and two types of verbs (strong and weak). The origin of the language dates back to 6th century AD. However, enough of that, let’s see why this language has more to offer than we can possibly imagine.

Reasons to Learn the German Language

Free Education in Germany
Way back in 2014, the sixteen states of Germany unanimously abolished tuition fees for undergraduate students at all publicly run German universities. Hence only for a small and relatively negligible fee, such as administration and costs per semester charges, both international and local graduates in Germany can study for free. This certainly is a huge incentive and has definitely made Germany a desirable option for students. No wonder the country is often ranked as one of the most popular destinations for international students in the World. In light of this, many other countries have also tried to offer minimal charges to students when it comes to higher education, including Austria, Czech Republic, Denmark, France, and Norway, to name a few.

Whole New Internet & World of Entertainment
Oh boy, we simply cannot tell you what the world of entertainment has in store for you if you are German or know how to speak the language, it seems like the Germans are into everything. For music, you have various artists, including the likes of Rammstein, Kraftwerk, and Guano Apes in recent times. Then there are sports including baseball, ice hockey, soccer, you name it, they play it! Then there is a whole range of TV series and movies that can get you addicted in no time. Simply go online, and you will find the internet bursting with content dedicated to German audiences.

Business and Trade Benefits
It shouldn’t be much of shock to find out that Germany is, in fact, the largest European trading partner with the US. Germany makes so many things, including chemical products, metals, machines, and vehicles, just to point out a few. Hence if you are looking to strengthen your career chances in the trading business, then learning German can help you deal with a lot of business partners. Plus, Germany has one of the biggest economies in the world, making over trillions of dollars. In fact, in Europe alone, Germany easily topples over both the UK and France. Take a hint, Volkswagen is German, and the Volkswagen Group oversees Audi, Bentley, Bugatti, Lamborghini, Porsche, and even the motorcycle brand Ducati. The company alone has operations in over 150 countries and over 100 production facilities.

Unlock Career Opportunities
Learning German is like a good investment. First of all, let us point out the fact that German is an easy language for English speakers to master. Both English and German languages share common Germanic roots. Many German universities have an excellent reputation in the international community. Plus a lot of German companies are global powerhouses. In fact, many well-known and renowned brands are German, including Adidas, BMW, Hugo Boss, Mercedes, Metro, Nivea, Puma, Siemens, and the list just keeps ongoing. Who wouldn’t like to be a part of these big names in the industry?

Understand the Works of the Greatest Innovators
Some of the best works that mankind has pulled off in the last century, originally come from Germans. The list of top German inventors includes the likes of Albert Einstein, Karl Benz, Rudolf Diesel, and Robert Bunsen though we know that this still doesn’t do justice to them and the rest of them all. When it comes to German inventions that revolutionized the world, some of them include the electron microscope, Diesel engine, MP3 audio format, and the printing press. In short, there is an overabundance of German innovations and their inventions that the world still uses to this day.

Help in the Study of Science
It goes without saying that many works of science are also deeply rooted in German. So if you are a young scholar who looks to create an impressive persona in academia, then learning German is the way to go. German, in fact, is often ranked as one to top most commonly used scientific language by the academic community. And why not, there are already a massive number of award-winning scientists in this world that belong from Germany. More than a hundred Nobel Prizes, have been won by the outstanding Germans in the past, including accomplishments that range from chemistry, literature, medicine, physics, and various other areas. You can even buy assignment online that is written in German from professional writers.

Become a Part of a Global Culture
Along with a significant online presence, and also being considered as the most widely spoken native language in Europe, it seems like Germans are everywhere. Many German citizens are often known for their voracious traveling habits. This means there are chances that you can run into a German as many of them like to spend their savings on tourism. This naturally has also promoted German heritage to various parts of the world. In fact, if you are a fan of Bruce Lee, you should know that the mother of this famed actor was of Eurasian ancestry, where some sources say that she was half-German.

Traveling and Making New Connections
If you are a traveler, then learning to speak German can help you make new and incredible connections with people across the world. Take the Oktoberfest in Munich, which has over 6 million people from all over the world, joining in on the fun every year. Plus, even if you just go online, you will find incalculable forums where you can interact with people that speak German. Hence there are no limits as to what you can do after you have mastered this language.

Contrary to popular belief, learning German, especially for English speakers, is not that hard as it seems. While many people would consider learning other languages as a personal preference, learning to speak German has a lot of benefits that can improve your dealings in both personal and professional circles. A little bit of consistency and some refreshing German language teaching classes, we are pretty sure that anyone could catch up on German quickly and add it to their individual account as a valuable asset indeed.

Author: John William currently works as an Employee Trainer and HR Consultant. He likes to share his opinions and knowledge with a like-minded pool of audience online as well. John loves to read, travel and strawberry pancakes. 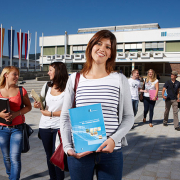